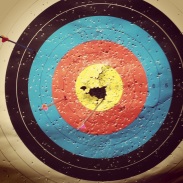 Last night I tied up my best Katniss braid and headed out to the Woodley Archery Range for their FREE archery class. When I was a kid, I used to frequent this park to go bike riding but I had no idea that tucked back between the golf course, Japanese gardens, and cricket pitches is a rustic archery range. That’s one of the things that I love about moving back to Los Angeles, the chance to rediscover my city.

I read on yelp that the class fills up fast so I made sure to arrive early. GPS will only take you so far. Make sure to check out these turn by turn directions before you check it out. The registration process was pretty straight forward: show up, sign your life away, get fitted for a bow, etc.. but what surprised me was that since I’m left eye dominant, I have to shoot left handed even though I’m right handed. According to a few of the certified archery instructors, 1/3 of archers are cross dominant and the act of shooting an arrow is so awkward at first that it’s better and safer to go with the dominant eye rather than the dominant hand. Also, for us double jointed people, we need to make the extra effort to rotate our bow elbow in. Why you ask? Well, if you leave your elbow sticking out then it has a really good chance of getting smacked by the arrow and/or the bow string. Don’t believe me? I got lazy a few times and now have the battlescars to prove it. The more you know….

I have to give the Woodley Archers an A+ for their range safety. For someone as accident prone as myself, I truly appreciate their step by step instruction in arrow recovery and shooter awareness. They even went over park and bathroom safety. No joke. Apparently there are some “shady characters” who frequent the public restroom near the range and “vice squad is in and out of there weekly.” Welp. The more you know?…

The actual act of shooting was so much fun! I was lucky enough to have a small class and so, I got a lot of one-on-one instruction from an instructor who also happend to be a Michigan dad. Go Blue! He was really helpful, respectful, and informative. By the end of the class I had shot a few bullseyes!

The overall vibe of the crowd was eclectic: from the pre-teens to the corporate types, frat bros, to the tatted up Scottish man wearing, I kid you not, a purple kilt and combat boots, it goes to show that everyone appreciates a good deal and a good time. I will definitely be checking out this class again in the future.

Proof I was there. #selfie #thebeatfitness
The Beat Fitness
Jason Laughlin at The Mint